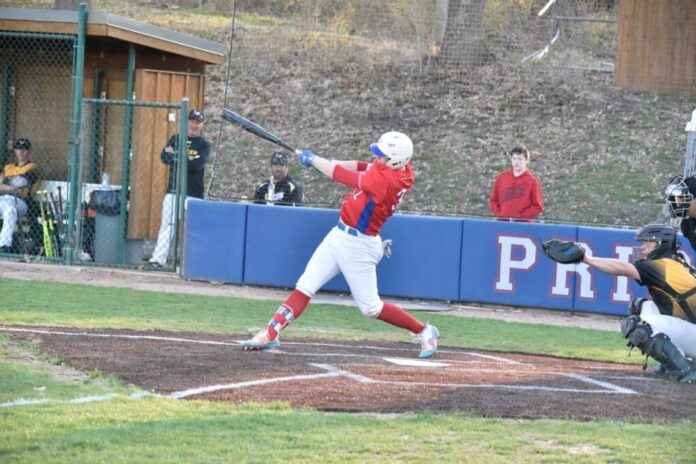 Mark Shallenberger is a native of St. Louis, Missouri. He attended Saint Louis Priory High School, a Catholic prep school run by monks form the Abbey of St. Anselm and St. Louis in the order of Saint Benedict. One of the top high school fielding first baseman in the country and a Perfect Game All-American, Shallenberger is also a gifted lefthanded pitcher topping 90 mph as a freshman at the University of Evansville following a prolific high school career at Priory with two no-hitters his senior year.

Shallenberger had a very strong showing in the St. Louis Metro Collegiate Baseball League, an amateur summer baseball league mainly consisting of current college players and some rising freshmen players. Following a 24-6 regular season record, the power-hitting lefthander lead the Kats to the team’s first Metro League championship. For much of the season Shallenberger was among the league leaders in homeruns, RBIs, walks, on base percentage, and OBP despite missing a number of games playing abroad for two weekends. When the playoffs came around, he started things off with an early homerun in the championship game.

Shallenberger led the postseason with a .467 average, nine runs, seven RBI, two home runs, 11 walks, and 1.000 slugging percentage. In addition, the future Evansville Purple Ace, who had only pitched two innings over the entire 30-game regular season, pitched three post-season innings striking out a whopping nine hitters while giving up only one walk one hit earning a critical save in his only post season pitching outing. To say he carried the team in the second season would be an understatement. He was simply unstoppable.

After starting his first college campaign at the University of Evansville as the Designated Hitter – slotted in to the clean-up spot behind all-conference sensation junior first baseman, Tanner Craig, –Shallenberger transitioned to the outfield starting every game between left field, right field and DH as a freshman. Despite being slotted as a reliever before the season started, Shallenberger hit his way out of the bullpen, never giving Coach Wes Carroll, the opportunity to see the freshman southpaw in game-action.

The future baseball career for Mark Shallenberger has a very high upside. He is a big, strong, fast athlete with terrific hand-eye coordination and both offensive and defensive skills on the baseball field. Oddly, his future as a two-way player may be in jeopardy not for a lack of skill, but because of too much skill. Shallenberger is an outstanding hitter, a threat as a power hitter and as a high average batter. He drives the ball well to all fields and he has natural power. It is more likely that he will continue to get stronger as he matures in to his strong frame.

Not only is Shallenberger gifted on the baseball field, but he is an excellent student having received a National Merit Scholarship. An honor student at Saint Louis Priory nearly achieving a perfect score on the ACT (American College Testing) standardized college admissions test the one and only time he took the test as a high school junior, Shallenberger arrived at the University of Evansville with 45 college credit hours, an academic sophomore, before attending a single class at the private liberal arts university in Evansville, Indiana.

What’s in store for Mark Shallenberger after his career at the University of Evansville? Some think it could be as a baseball player. Others think graduate school – whether it is in lieu of or following post-college baseball career – could be in order. Shallenberger has been a student of the game since an early age, so the possibility of coaching, baseball administration, or even as a player agent is a possibility.

Studying for degrees in both Mathematics, Statistics and Data Science and Psychology and Neuroscience with minors in Spanish and Economics, it is rumored that Shallenberger may well try to earn a third degree in his four years as a Purple Ace, perhaps, in Political Science. No matter what the degree(s) turn out to be, the list of academic accomplishments is already long and strong. Shallenberger is a true student-athlete in all senses of the word.

The Vanderburgh County Sheriff’s Office is proud of the great strides taken by the youth in Evansville. Mark David Shallenberger is proud to call Evansville home at least the 9 months a year on the campus of the University of Evansville in Vanderburgh County. Raised a Catholic, Shallenberger attends the University of Evansville, originally founded in 1854 as Moore’s Hill College and affiliated with the United Methodist Church.