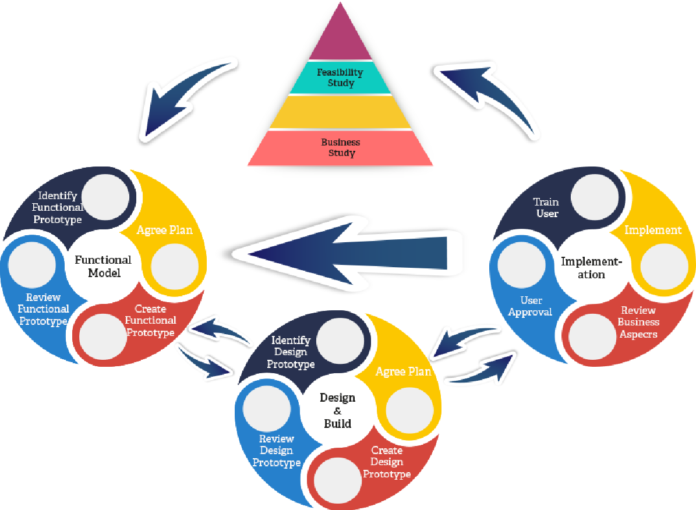 Dynamic system Development Model is a software development approach that is divided into six phases. Each phase has its focus on different aspects of the life cycle. The main objective of this phase is to produce an implementation model that reflects the problem domain. The model should be as simple as possible and contain only those elements that are necessary for understanding. The implementation projects should not be started before this activity has been successfully completed.

The DSDM method is built around six phases which are mapped to the phases in conventional (or waterfall) software development models. Each phase consists of specific activities, deliverables and roles. The phases are not strict separations; there is considerable overlap within each phase and sometimes several days between two successive phases. DSDM puts emphasis on continuously checking progress against plans, timeboxing project scope and iterating through this process until all aims are achieved.

DSDM project life cycle can be described by the DSDM seven stages process. The following is an outline of this life cycle:

The following table shows a more detailed description of each phase and its main activities:

DSDM has its roots in the Software Engineering Institute (SEI) “CMM” (Capability Maturity Model). DSDM was created by Mark Little and Alistair Cockburn, who had collaborated at the SEI on CMM. The goal of DSDM was to create an approach that allowed for quick delivery while maintaining quality, and that could be applied across different domains such as finance or insurance companies. DSDM supports this through, among other things, its use of a single integrated team made up of stakeholders and developers. The Alliance later also moved towards the development of software for business intelligence applications using DSDM methods. The method is supported by training courses provided by the respective suppliers.

DSDM consists of six phases, each identified with a project letter A to F.

Phase A usually takes one week and results in an initial draft version of the plan that includes, among others: objectives for this project, scope description, critical success factors, risks associated with this project etc. The following table contains some possible activities performed during the phase A (in order):

During phase C there are several workshops (that last about two days) where it is decided what to do in the next project phases. At the end of this workshop, after a review meeting, there is a formal presentation of the plan and it is approved by all stakeholders (normally with no comments or modifications). An example of a Gantt chart for a typical project is presented below:

The following table contains some possible activities performed during phase C (in order):

After the planning session, DSDM practitioners begin developing one or more detailed plans that include resource requirements, total timescale and cost estimates. Projects are then planned using techniques such as PERT charts and network analysis. When Phase F has been completed successfully, this culminates in a ‘Go/No Go’ decision from top management to start implementing the project.

The project phases are summarized in the diagram below. Each box represents a phase where the DSDM method is applied, and each line indicates that information is passed between two phases. The boxes that do not contain any text indicate that there is no detailed planning done during these phases.

Possible results of Phase C are:

When all activity plans have been developed for Phase D, one of them must be chosen as the ‘Base plan’. All deviations from this plan (for example, due to problems on site) should be compared with the Base Plan to determine if they require re-baselining or not. If none of them can be incorporated into it without major changes, then some other activity may need to be added to the plan, or the entire base plan will need to be re-baselined.

Baselining is a process that should only be undertaken once each project. Typically, it is carried out during Phase C. If it is not completed at that time then you should complete this process shortly after the completion of Phase D (or as soon as possible). After baselining has been done, activity plans cannot easily be changed without approval from relevant stakeholders.

While one life cycle model might say that an Activity Plan can be modified anytime during its execution, another life cycle model might state that all changes must wait until after baselining occurs. In either case, changes require approval from your relevant stakeholders and typically have to be done prior to the completion of your project.

Your results from this step will be captured in a document that is called an activity plan. This is usually a small, simple document with few pages. The contents should be very quickly and easily understood by anyone reviewing it. It does not contain any technical or design details; instead, it provides only high-level descriptions for each task along with sufficient information to understand what has been completed and what remains to be done and why (the “why” includes both value and risk).